Tom Stocky wants to tell you what people think about things that are happening around the world right now. It sounds a lot like the mission of Twitter, but Stocky works for Facebook, tackling a problem the company has continually struggled with: search.

There are 1.5 billion searches a day on Facebook, but the vast majority are for people’s names—the kind of search one might surreptitiously conduct after meeting an alluring stranger in a bar. Last October, the company quietly made it possible to search for all public posts on Facebook, not just material posted by friends or pages. Stocky’s team developed the new function, which uses an algorithm to rank and refine trillions of posts from Facebook users. “What we really tried to do was make Facebook a place where you could tap into the global conversation of what was happening in the world,” Stocky said at Facebook’s Menlo Park, California, headquarters, unwittingly (or perhaps not) trotting out a favorite phrase of executives at rival Twitter. “We really want to basically make Facebook the best place to find what people are saying about something right now.”

A usable search tool on Facebook could have big implications for the social network. People might rush to restrict their privacy settings once they understand that their posts are discoverable by anyone. Or they could scramble toward the limelight, crafting timely posts for a mass audience and giving the social network into the kind of topical and pulse-quickening timeline currently featured by Twitter. It could be Twitter, but with 1.6 billion users instead of 320 million. It could be Google, but personalized and populated by friends.

“If search on Facebook really takes off, I think Google is under pressure,” said Victor Anthony, an analyst at Axiom Capital Management. “If they get it right and they’re able to monetize against searches, it’s extremely lucrative for Facebook—billions in revenue.”

But first, there’s a lot to get right.

Search was one of the first features Chief Executive Officer Mark Zuckerberg built for Facebook when he started it at Harvard in 2004. Those first college students could have a profile, and they could search for friends to add—and that was it. Throughout the years, Facebook has made some moves to enhance the search bar that it prominently placed on the top of the page, but for the most part, it languished.

“When people actually associate Facebook with answering the questions they have, that’s when we’ll be successful.”

In 2010, the company made a deal to let Microsoft show its Bing Web results there. A couple years later, Facebook made an attempt at its own social database crawler, which it earnestly dubbed Graph Search. Zuckerberg introduced the product at a press conference in January 2013. It required users to enter queries in a highly stylized way, as if they were talking to a robot: “My friends who went to high school in Long Island and live in Philadelphia” or “Google employees who like national parks.” Not surprisingly, it never caught on. A year later, Zuckerberg admitted to Bloomberg that Graph Search didn’t work as intended even half the time.

The idea behind the new search effort, according to Mike Vernal, Stocky’s boss and a vice president of search, is that the average Facebook post is interesting for longer than the customary five hours it might be immediately findable in the news feed. People are commenting on Bernie Sanders’ tax plan, sharing dinner recipes or bragging about a recent vacation outing, and those contributions might have lasting value. “Our founding belief is that there’s a huge amount of wisdom and knowledge in that information after 12 hours, after 24 hours,” Vernal said.

Over the last couple years, the company started ramping up its recruiting, luring search engineers from competitors and building  new types of hardware and infrastructure for its data center to handle the enormous amount of storage.

Building search on Facebook, like elsewhere on the Web, starts with indexing. The moment someone posts on Facebook, the sentences are scanned for keywords. Facebook’s computers then ask some more qualitative questions: Is this well-written? Are there grammatical errors or misspellings? Does the writer usually get many likes and comments on their posts? Are they an authority on this subject, based on what they’ve written in the past?

“In order to have Facebook have the best most accurate results, we need to make sure that all the updates—every single photo, every single video, link, share, like, comment—is reflected in our index in a matter of seconds,” said Girish Kumar, Facebook’s director of engineering for search, who used to be the head of search quality for Microsoft’s Bing.

When you perform a search, the company asks thousands more questions to draw the best results and ranks them based on recency and relevance. Kumar says Facebook’s algorithm prioritizes results from original sources and authorities on the news. Friends will be high in the results. But brands, pages, celebrities and strangers will, too. 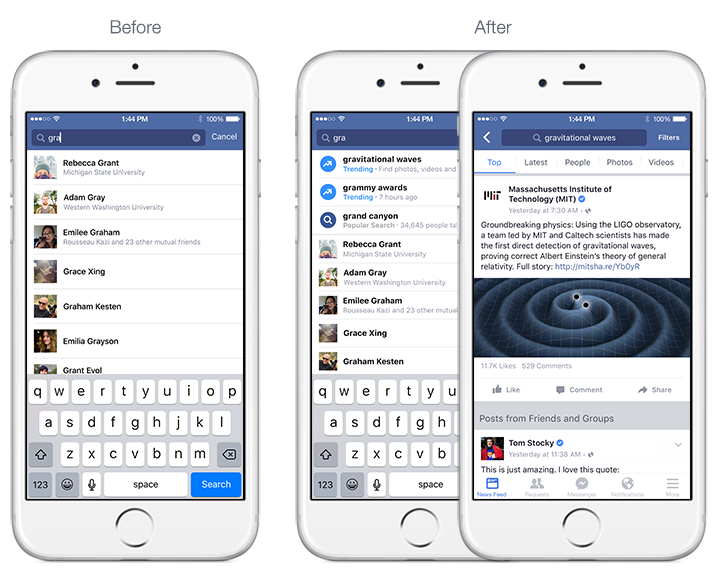 There’s been a lot of trial and error. The company has hired hundreds of testers, both permanent employees and contractors, to spend hours painstakingly searching the social network. As recently as a couple months ago, the results weren’t that good, Stocky said. Getting recipe results when searching for Turkey, the country? Facebook didn’t factor that the phone was in Istanbul during the search.

Most people are using the new search algorithm without even realizing it, and in the process they’re helping to make it better. When you click on a post and share an article, Facebook now uses the search tool to provide a link that shows how many people are talking about it, and suggests related stories that are also being shared on the site. When you use Facebook to “check in” to a restaurant or other location, Facebook search finds other people who have been there and offers up their posts about it. Search will become more of a habit for Facebook’s users the more invisible it feels, says said Nicolas Dessaigne, the CEO of Algolia.com, a search tool for businesses to use internally.

But using the main search bar is a different story, and people may not want to change the way they use Facebook, said Mark Mahaney, an analyst at RBC Capital Markets. “They think of Facebook as the place they communicate and share with their friends,” he said. Even though Facebook offers something different than Google—the wisdom of friends—the company “would have to come up with a better search experience to get people to consider using their search functionality instead of Google’s. The odds are very slim.”

Facebook search is already paying minor dividends—at least for its own executives. While he was testing the service last year, Stocky needed to buy a baby monitor. He searched for the names of two brands, found friends who had posted about them, messaged them both and borrowed their old monitors for trial runs. Search didn’t turn up much of a global conversation, but Stocky hopes that will change.

“You should be able to tap into these perspectives and experiences from people you don’t know,” Stocky said. “When people actually associate Facebook with answering the questions they have, that’s when we’ll be successful.”