The editorial in the February issue of the scientific journalCladistics didn’t exactly drop with a bang. Cladistics has around 600 subscribers—almost half of which are libraries or other institutions—and it’s aimed at “scientists working in the research fields of evolution, systematics and integrative biology,” as the journal’s summary says. It’s a journal about building evolutionary trees of life, basically. Important, but harmless, right?

This particular editorial was, on its surface, in keeping with that approach. Heavy on jargon, only two references—one of them from 50 years ago, the other from 30—it was close to a cri de coeur. “Phylogenetic data sets submitted to this journal should be analysed using parsimony,” the editorial reads.

In short, the editors of Cladistics were insisting that anyone trying to build those trees of life had to use a method called parsimony—that, in fact, anyone who didn’t use parsimony wasn’t doing real science.

Science Twitter caught fire pretty fast after that. Researchers in the field got mad; the society that publishes the journal got mad back, publicly. Things, as they say, escalated. Now, if this were just another slap-fight in the letters page of just another mid-tier journal, that probably wouldn’t matter. But the battle over parsimony is actually the story of a bizarre war between biologists and a scientific society with a reputation for bullying. And at stake is the way scientists make sense of the natural world.

Growing the Trees of Life

You’ve seen evolutionary maps before. Even Charles Darwin used the metaphor, envisioning an earlier species that gave rise to new ones, each new species splitting off as a branch of an ever-growing tree. Scientists are still growing that tree. How to do it, though, and where to put everything, is always in play. This field of research is called phylogenetics: the study of the evolutionary relationships between organisms.

One approach for growing these trees is called parsimony. The basic idea is that the tree with the fewest number of evolutionary changes is the most likely to be true. It’s like Occam’s razor, if Occam had been an arborist. So, for example, if you built a tree that grouped gorillas with, like, tigers instead of humans, that would mean evolution had produced the opposable thumb twice (for gorillas over there and you and me over here). But group gorillas on a branch with humans and we share some common ancestor closer to the trunk who evolved an opposable thumb just once. Parsimony says, well, that’s your tree.

It’s not the only way, of course. Another approach, “likelihood,” is about comparing different trees and running computer models for how likely types of changes are. An offshoot of that, the Bayesian approach, actually calculates the likelihood of a given tree. With the distance method, “you’re not comparing different trees to each other, you’re just calculating a tree with a formula that might be really good,” says Jonathan Eisen, a evolutionary biologist at UC Davis who was one of the more prominent scientists to punch back at the Cladistics editorial shortly after it published1—about which more later.

All told, scientists have a lot of techniques to choose from—and a lot to argue about. Which phylogenetic method works best depends on a whole slew of factors: what type of data you’re working with, how deep you’re trying to look back in evolutionary time, whether you have missing data. “It’s not easy to pick which method is the most appropriate for a given data set,” Eisen says, “which is why some people compare multiple methods.”

That editorial, though, suggested a more draconian heuristic. Parsimony. You can use other approaches, too, but you must always come back home. “If alternative methods give different results and the author prefers an unparsimonious topology, he or she is welcome to present that result, but should be prepared to defend it on philosophical grounds.”

That did not go over well.

“They said if you want to use another method, you have to show that it’s philosophically better, not scientificallybetter,” Eisen says. “That’s why I said it seems like they’re dropping science for dogma.”

Eisen took to Twitter—starting the hashtag #ParsimonyGate, which other biologists ran with in their own tweets—to call on the editors of Cladistics to clarify what seemed to be an anti-science editorial.

Mark Siddall, treasurer of the Willi Hennig Society, which publishes Cladistics, did not let this go. (Siddall declined comment for this story.)

Siddall insisted that as treasurer of the society, he had no role as a writer and editor of the editorial. But he didn’t like the hashtag, didn’t like Eisen saying libraries should stop carrying the journal—a major source of income for most journals—and in general didn’t like Eisen stirring up trouble. 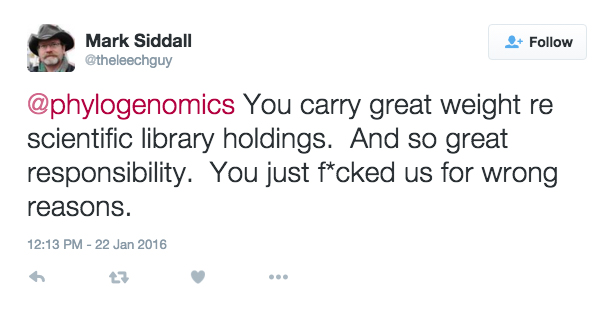 Sometime late on January 22 or early the next morning, Siddall either deleted his account or Twitter suspended it. But on January 25, he was back with a tweet about a very different sort of Descent of Man: his one-month-old son. Aw.

This fight over phylogenetics is about way more than some less-than-artful phrasing in a journal editorial, or a point of philosophical disagreement. It turns out that the Willi Hennig Society is infamous for an often pugnacious defense of parsimony as a method above all others. “This is an extremely devoted, almost bullying school of thought that has been around for 15 or 20 years,” says a biologist who asked for anonymity because—and this is astonishing, when you think about it—the biologist was concerned about retaliation from Willi Hennig Society adherents. “I’ve been heckled at a Hennig meeting,” he adds. “It’s like high school.”

This biologist is clearly not the only one with beef. As the Twitter firestorm unfolded, other scientists—including Lars Arvestad, a computational biologist at Sweden’s Science for Life Laboratory—came forward with similar tales.

“That’s one thing that happened 20 years ago, 25 years ago,” says Dennis Stevenson, editor in chief of Cladistics. “I think that was many years ago that the meetings were highly contentious, and people didn’t go because people were yelling at each other and stuff.” (Our source says his incident was less than a decade ago.)

#ParsimonyGate turned into one big airing of grievances. One scientist called the group a cult and another suggested the editorial must have been either a joke, prank, or hoax.

The thing is, few in the field would argue that peopleshouldn’t use parsimony to sort out phylogentic trees. Even Eisen uses it in his own research—alongside other methods. He even teaches parsimony to his students. It was the editorial’s use of the word “philosophical” that rankled him.